The analysis of developments in global private sector credit markets is fundamental to our understanding of the global economic and financial outlook. However, the actions and interventions of central banks and government have become increasingly important to our economic assessment.

Since 2009, we have maintained that the only credible resolution of the 2008 global credit crisis is a resurgence of global inflation. We take an eclectic approach to the inflation outlook, considering political and socio-economic factors alongside macroeconomic drivers. We provide the multi-dimensional appraisal of the inflation outlook that is critical to formulating a successful investment strategy, at a time when inflation complacency is rife.

At Economic Perspectives, we appreciate that our Research Partners have diverse appetites for thematic insights and research ideas, and differing capacities to engage with our research output. Engagement implies interaction, and we value every opportunity to understand the questions and conundrums that our Research Partners are grappling with. These interactions help to shape our research agenda and hence the content of our publications.

Reflecting our visual age, our slidepacks illustrate key research themes and ideas with detailed charts and tables, some that we create and some that we borrow from other respected sources. Our presentations weave together argument and evidence into a cohesive whole.

Economic Perspectives submits monthly short-term economic forecasts for the UK economy to HM Treasury and Consensus Economics. Peter Warburton is a member of the IEA Shadow Monetary Policy Committee and contributes a named section in the monthly minutes.

IRF represents high-quality and differentiated Independent Research and Alternative Data Providers.
The IRF Podcast series consists of topical discussions with our Providers which are designed to keep you abreast of market developments across a wide range of disciplines. They are available on Spotify, Apple and Google.

In our latest podcast, David Osman of IRF is joined by Peter Warburton, founder of Economic Perspectives which he established in 1996. and renowned for the development of unique and effective behavioural models which when combined with a geopolitical overlay have a most impressive track record at predicting financial markets. David has also authored the highly acclaimed book, Breaking The Code of History, which has striking parallels with the work of Ray Dalio. 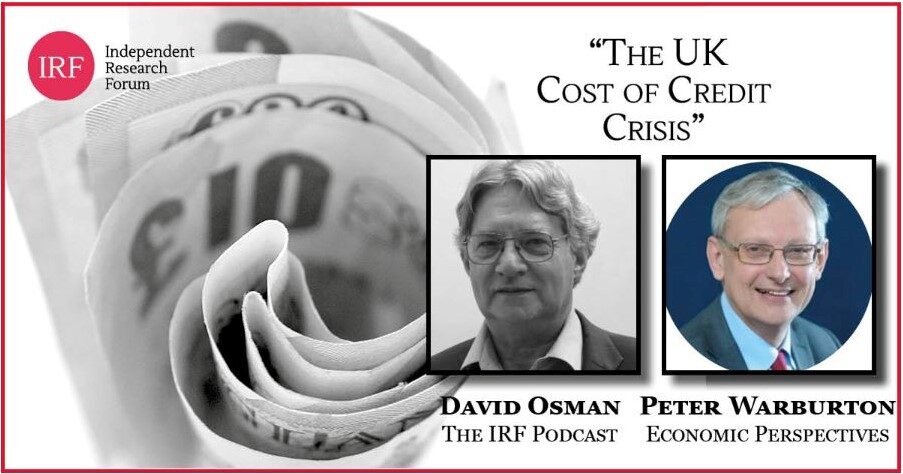 Peter Warburton discusses the way that the UK cost of living crisis is being compounded by a cost of credit crisis. He argues that following the global financial crisis in 2008/09, there has been a prolonged period of financial repression with low interest rates and the suppression of debt default. The impending credit crunch is not only due to rising interest rates, as there are also concerns about the mispricing of credit risks. Peter points out that fiscal policy has entered an era of bigger government with stagnating living standards and identifies those countries where double-digit inflationary pressures are particularly troubling.

Following the publication in the Sunday Times of David Smith’s annual league table of forecasts of the UK economy for 2021, in which Economic Perspectives came first, we have decided to publicise our economic forecasts for 2022 and 2023. The numerical forecasts are shown in the table below. We begin with a brief commentary.

UK ECONOMY STILL HAS A HILL TO CLIMB

The full set of national accounts that appeared just before Christmas, covering the third quarter of 2021, afford an opportunity to examine the extent and nature of the recovery from the atrocious slump in the second quarter of 2020. There is an annoying tendency to assess progress solely in terms of the restitution of the pre-pandemic levels of output and expenditure. US, China, Korea and several other countries have already recorded higher readings for real GDP than before the pandemic struck, but the UK – in common with most European countries – has yet to do so. Yet, however much governments may wish us to believe that our economies have regained their prior composure and momentum, like a fallen rider re-mounting his horse, the detailed figures tell a very different story. The two charts below examine the changing structures of output and spending, comparing 2021Q3 with 2019Q3. There are numerous structural differences but the two most prominent are the expanded size and importance of the public sector and the housing market. The 1.6 per cent shortfall in overall GDP rises to 3.1 per cent after the exclusion of sectors in which the public sector is dominant, such as public administration, defence, education, health and social work, and to 3.5 per cent when real estate is also excluded. The expenditure analysis is even more revealing, suggesting that the removal of public sector elements reveals a 4.9 per cent private sector shortfall against 2019. If household expenditure on housing and fixed investment in dwellings is subtracted as well, the shortfall swells to 7.3 per cent. The economy that fell off the wall in March 2020 is structurally different from the patched-up version that is reaching back towards it. Business investment is 12 per cent lower, household discretionary spending on clothing, recreation, eating out, foreign tourism (net) and so on, is 4.7 per cent down from 2019. International trade volumes are painfully lower: over 16 per cent for exports and 10 per cent for imports. The UK private sector economy is still nowhere near the size that it was in late 2019. The understandable and necessary scaling back of public spending in 2022 will expose the distorted composition of recent economic growth and the implausibility of consensus growth forecasts.

In marked contrast to the consensus, we expect 2022 to be a challenging year for the UK economy, with real economic growth in the region of 1 per cent to 2 per cent rather than the professional consensus of 4 per cent. The detailed forecasts that we submitted on 10 January 2022 are shown in the table below. 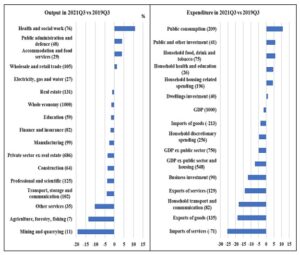 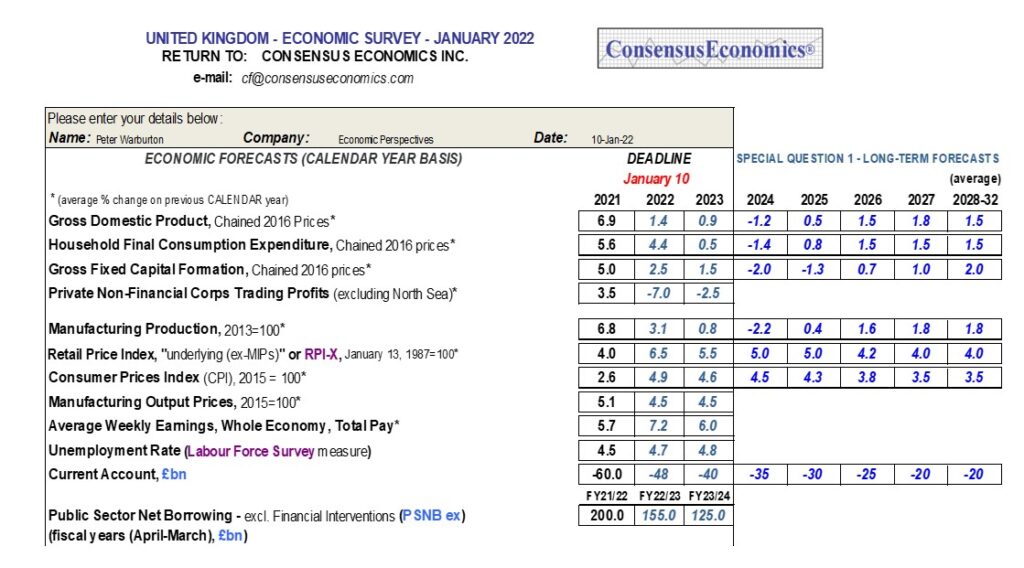 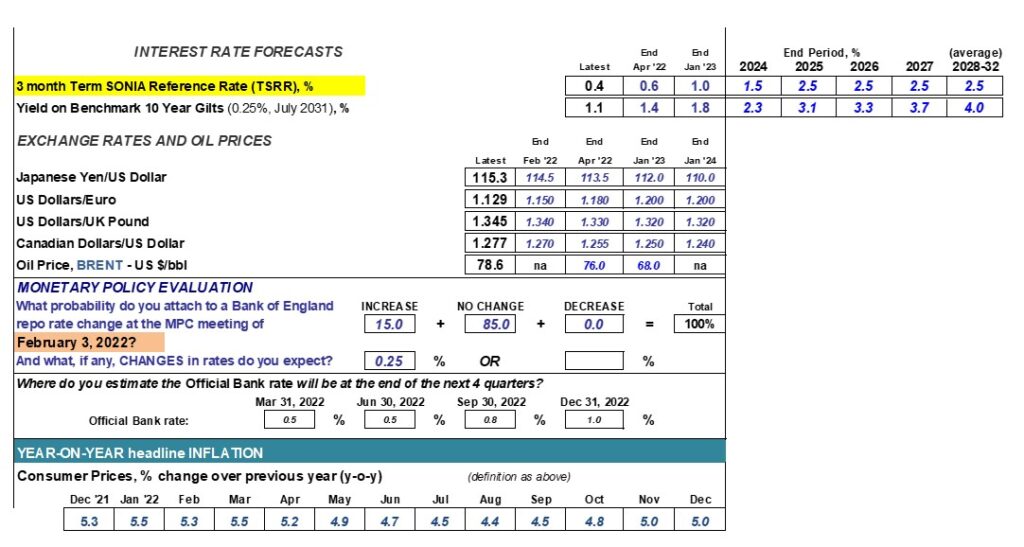 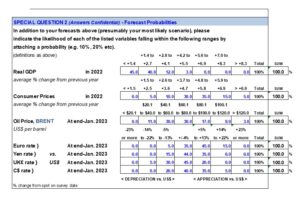 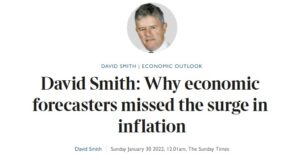 Interestingly, the highest inflation forecast in the annual comparison from last year was from Economic Perspectives, run by Peter Warburton, a former colleague of Congdon, with a broadly similar monetarist approach. He tops the league table. Patrick Minford’s Liverpool Research Group in Macroeconomics — which also adopts a monetarist approach, though a narrow rather than a broad one — was second, though his growth forecast was better than his prediction for inflation. 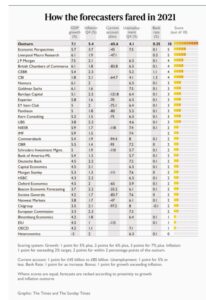 Peter Warburton quoted in an article in Thursday 20th January 2022 edition of The Telegraph - The party's over. The falling pound will be the next big inflation shock by Ambrose Evans-Prichard

Peter Warburton, a credit theorist at Economic Perspectives, fears it will not be so simple.  He has been warning all through Covid that Western central banks have been losing control of inflation.  Dr Warburton thinks we are in the foothills of a "price reset revolution" that will turn economies upside down, and especially the British economy.  "It is becoming increasingly likely that we have embarked on a multi-year reset of the price level, to the tune of 30 to 50pc," he said. 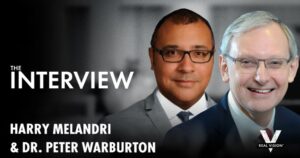 Why the 2022 Economy will be tough with multi-year inflation

While there is a consensus of projected global growth of about 4%, Dr. Peter Warburton sees great challenges for the world economy for 2022-23, believing that such growth will be difficult to come by as 2022 is a critical year of adjustments of large deficits. In this interview with MI2 Partners advisor Harry Melandri, Warburton, director of Economic Perspectives Ltd in London, provides a very somber outlook for the future with rising inflation—despite the Fed’s interest hikes and high volatility, where some assets depreciate. He also discusses how “the state has carried the economy through this difficult period and co-opted the central bank, in this case, the Fed,” which led to “a dominant thread of state-led credit creation.” This insightful interview helps us better understand how we should protect our investments and how we should prepare for an uncertain future. Recorded on December 28, 2021.