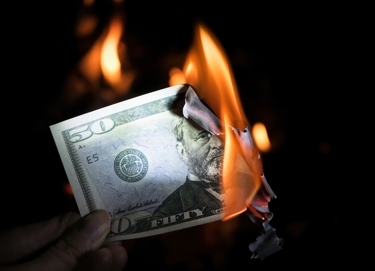 The US is facing an inflationary danger that is both credible and imminent. By its outrageous interventions and extravagant promises, the US government has underwritten a cost structure that is materially richer than that prevailing at the end of 2019. Unit labour costs are running around 200 basis points higher than a year ago, while profit margins have widened. Retail businesses have no incentive to rebuild inventory, preferring to keep longer order backlogs than usual and to collect scarcity premiums. International trade continues to languish, and supply bottlenecks are taking longer than expected to resolve. The escalation of US-China tensions ahead of the June G7 summit is distinctly unhelpful: Asian export price inflation is positive and rising. The Biden fiscal package adds fuel to a fire that is already burning.

Regular readers will be aware that I am a staunch critic of the output gap framework, other than as a heuristic device. The global financial crisis offered a dramatic case study (see Appendix 1) in the potential waywardness of the output gap in judging the inflationary outlook.  For a variety of reasons, I find the assertion that the US is running a large negative output gap highly contentious. More than 30 years ago, I devised an alternative data-based framework as an alternative to the output gap, called the Demand Pressure Index. My collaborator and friend, Andrew Hunt, has maintained the US DPI calculation and has kindly allowed me to share it (figure 1).

The concept of the DPI can best be explained by the analogy of a hog roast. In the absence of an oven large enough to contain the beast, probes are inserted into its flesh that determine the internal temperature and enable an informed judgement of the appropriate cooking time. The DPI contains 17 constituent indicators of demand pressure, drawn from the product, labour, trade and financial markets. A detailed list is provided in Appendix 2. Based on an equal-weighted average of the actual and estimated values for 2021 Q1, this was the highest demand pressure reading in at least 40 years. From 20 paces it may appear that the hog needs more heat; the probes suggest that it is somewhere between well done and burnt offering.

Figure 2 is another intriguing indicator, which combines the ISM activity and price data to create a nominal indicator, weighted 80 per cent services and 20 per cent manufacturing.  Based on an 18-month typical lead time, this composite indicator traces out an expected doubling in core CPI inflation over the next 12 months. Figure 3 identifies the close correspondence between unit labour cost inflation and core CPI inflation, with a 9-month lead of unit labour costs. The surge in unit labour costs (drop in labour productivity) is indicative of a step change in the cost structure of the US economy which will materialise as higher core inflation soon.

No single indicator is foolproof, but the body of evidence represented in these 3 charts provides a solid basis for inflationary concern. It has taken a pandemic to provoke the policy responses seen in the past 12 months, but the fading of the pandemic does not presage the end of the inflationary threat. Fire takes no prisoners and this administration has money to burn.

It’s fair to say that the inflationary narrative has taken hold in 2021, although many still consider that this will be a short-lived excursion, like the post-GFC burst of inflation in 2010-11. The dominant framework of thought remains the Keynesian output gap and the associated inference that the gap is currently negative, that there is “material spare capacity”, in most advanced economies. This judgement – and it can be no more than a judgement – insists that deflation is the greater danger, not inflation. Ergo, a massive new fiscal boost is an appropriate policy response, because it can be expected to have a differentially larger impact on real growth than on inflation.

This reasoning rests on a fundamental assumption, that the pre-pandemic trend of real growth is undisturbed. The notion of a large negative output gap derives from an expectation that real output will return to its prior trend as soon as it is practical to do so. In other words, the analysis starts from a presumption that pre-pandemic growth rate was and is sustainable. Further, that additional deficit spending is justified in the attempt to drive output back to trend quickly, to avoid scarring or hysteresis.

It is sobering to reflect on the progressive shortfall in UK real GDP per capita from its prior trend, that has evolved since the GFC: 22 per cent by the end of 2019! How confident should we be that the pink line, in figure 4, representing an annual growth rate of merely 1.1 per cent, can be recovered? What if the credit cure is worse than the disease? Surely, the recourse to ever more leverage is the antithesis of sustainability?

The counter narrative is that systemic private sector leveraging supercharged UK economic growth between 1992 and 2008 and the GFC skimmed off the froth. Since 2014, private sector leverage has rebounded once more, yet to much weaker effect in terms of living standards. Has the pace of sustainable economic growth been overstated again? Will the over-use of public borrowing deliver a disproportionately inflationary outcome?

Appendix 2: Constituents of the US Demand Pressure Index